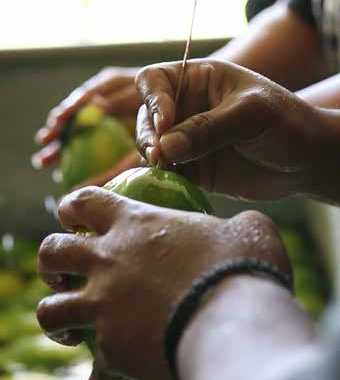 Like many things that make a lasting change, it started off with something simple – in April 2015, a farmer from Fiji, Livai Tora, was invited to Tonga to work with 68 farmers on papaya production in the country. The farmers came from five separate farmer organisations and such was the impact of this initial technical exchange, that three follow up visits were arranged, with the farmer organisations investing their own funds to make them happen.

The technical exchanges included a broad range of up-skilling of Tonga’s papaya growers aimed at enabling them to better participate in commercial agriculture, including value chain training. At the same time, work was done on increasing the productivity and the environmental sustainability of the growers farming operations, and to develop and implement a commercial papaya production plan.

In May 2016, five growers and two exporters from Tonga visited the Nature’s Way Cooperative in Fiji to gain first-hand exposure to an operating papaya export industry. They visited a variety of actors along the value chain including: nurseries, growers, exporters and biosecurity. The group met with active industry people, directly involved in the fresh papaya export business.

Two years after the initial technical exchange, in June 2017, the Growers Federation of Tonga sent their first shipment of export sunrise papaya to New Zealand. Initial feedback was very positive on the quality of the fruit. Since the initial shipment, a further four shipments have been made, representing a total of 4.6 metric tonnes of fruit, worth TOP 21,4092 squared.

The total annual value of this export market is estimated to be 20 metric tonnes, worth TOP 92,000. Of this total, it was expected that around 20% would reach the growers, providing an extra TOP 19,700 into the pockets of Tongan farmers every year to provide for their families. A further TOP 55,000 was expected to go to the other Tongan actors in the value chain, providing an important boost to the economy and an additional source of foreign currency.

The development of this new export industry, which was driven by farmer organisations, highlights the benefits which can be achieved from collaboration between regional and national farmer organisations, participatory value chain training, farmer-to-farmer exchanges and the need for partnerships between a range of government and non-government organisations to achieve results.

Unfortunately, despite the initial successes, Tropical Cyclone Gita hit Tonga in February 2018, destroying many of the papaya trees and putting a temporary halt to the export industry. Natural disasters are an ever present threat in the Pacific and largely beyond the control of farmers and farmer organisations.

While work is being done to try to re-open the export market for 2019, the technology transfer and know-how remains in Tonga to benefit papaya production for domestic consumption. GroFed has convinced several of their growers to continue production for the local market, with domestic sales of papaya providing an estimated TOP 5,000 per grower annually. One grower has been able to pay-off his long outstanding housing loan from his papaya income, while the two women growers have both indicated that they will go local.

In the meantime, GroFed continues to distribute papaya seeds and provide production training to local farmers, improving the domestic papaya industry. Their research into papaya based agro-processing is also progressing, with products like dried papaya likely to be available in the near future.